Shopping Cart
Your Cart is Empty
Quantity:
Subtotal
Taxes
Shipping
Total
There was an error with PayPalClick here to try again

Thank you for your business!You should be receiving an order confirmation from Paypal shortly.Exit Shopping Cart

During the early 20th century, part of the Clinckett clan in Barbados migrated to the United States. Reasons for this major change are not entirely clear, since we have no records (such as a diary or letters) providing detailed explanation. Of course if anyone has such written information, please consider sharing!

Economic problems in Barbados are likely one of the primary drivers for the relocation. Similar to other islands in the West Indies, economic success of Barbados had long been subject to ups and downs of the world market for sugar, produced from sugar cane grown on the plantations.

While Robert Gaskin Clinckett (born Dec 27, 1881) and Leila Margaret Hinds (born Sept 21, 1882) were growing, the sugar-cane based economy of Barbados was declining.

As explained in "Barbados: A History from the Amerindians to Independence", by F A Hoyos (1978), European purchases of sugar cane decreased steadily during the 1880s and early 1890s.

After the sugar cane depression bottomed out in 1896, a brief period of improvement occurred due to disruption in competing islands (Cuba and Puerto Rico) during the Spanish-American War. However, after the war, the American market for Barbados sugar declined again as sugar cane production in Cuba and Puerto Rico was restored. Although increased exports to Britain and Canada saved the Barbados sugar cane industry from complete collapse, various calamities also occurred, including a destructive hurricane (1898), smallpox (1902) and yellow fever (1908).

Seeking to escape difficult conditions, and encouraged by the Barbados government, a steadily increasing number of "Barbadians" made the decision to seek work elsewhere. Many moved away from the island permanently. Tens of thousands of laborers found work building the Panama Canal.

During World War I, the market for Barbados sugar increased dramatically due to destruction of competing sugar-beet sources in Europe. However, in 1921, another sugar cane depression occurred as Europe recovered.

Robert Clinckett and Leila Hinds were born in Bridgetown, the capital city. There is not much in the way of recorded information about childhood activities. However, stories from grandchildren may be available in the near future.

Three daughters were born in Bridgetown, Barbados, although the couple made various moves during this period, as described below.

With newborn daughter Leila, the couple moved to the island of Trinidad in 1904 where Robert took a job with the Royal Mail Steamship Company. They moved back to Barbados in 1906.

With the economic outlook in Barbados not particularly attractive to the young and restless, Robert (age 24) soon followed his brother (Richard) to New York City, arriving on June 22, 1906.

Four months after second daughter Helen Edna (known as Edna) arrived on the scene, mom Leila set sail for New York City with Robert's mother (Helen) and a young woman (Lottie Chandler) who was apparently a friend of the family. Edna, considered not strong enough for long-distance travel, remained in the care of relatives on Barbados.

Records do not show where the group lived after landing in New York. However, as of 1910 (per US census) they had joined Richard Clinckett in Union Township (Bergen County) New Jersey, across the Hudson River from the upper reaches of New York City. They lived with another extended family from Barbados (Richard & Laura Batson). Arthur Hinds (brother of Leila Clinckett), also making the jump from Barbados, moved in as well.

Available records do not explain how Robert Clinckett, brother Richard and Arthur Hinds made a living in New Jersey. However, in the 1910 Census, Robert is listed as "Clerk" and Arthur is listed as "Electrician".

In late 1911, Leila returned to Barbados (with daughter Leila) so that third daughter Dorothy would be born as a British citizen. Mom and both daughters quickly returned to the US in July 1915, with daughter Edna (age 5) remaining again in Barbados.

Per New Jersey census of 1915, family (and friends) had moved south to Fanwood, New Jersey, which is just about due west of Manhattan (NYC). Richard Clinckett, William Hinds (another brother of Leila) and a friend (Raymond Glanville) are shown to be residing with Robert, Leila and two daughters. Helen Clinckett (Robert's mother) had apparently moved elsewhere. Occupation for Robert is listed as "clerk".

In 1916, Robert, Leila and daughters returned to Barbados. Definitive explanation for this return is not available in the records. At age 34, there was not all that much risk that Robert would have been "drafted" to join the US "expedition" in France. However, he may have believed the risk of military induction was not favorable. As explained in an online source (http://www.archives.gov/genealogy/military/ww1/draft-registration/), the first US draft (June 1917) called for registration of all men between the ages of 21 and 31.

As noted above, the Barbados economy rebounded during World War I. Upon reintroduction to Barbados, Robert operated an "import business". Details of living arrangements are not available. In May 1919, after World War I ended, the foursome once again sailed north to the US on the ship "Guiana".

Per the 1920 US Census, Robert and Leila, along with daughters Leila and Dorothy, were living at 2121 Clove Road in the Grasmere section of Staten Island (New York City).

In 1924, Leila began working for the Cunard Line (cruise ships). She set up the first on-board beauty salons for Cunard, sailing to exotic ports of call. Her first cruise ship was the Samaria, sailing out of Havana, Cuba. On letterhead of the ship Cunard RMS "Franconia", dated 1925, Leila writes about her travels to daughter Dorothy; "Well dearie here we are in Egypt again.........We have been in Alexandria for several days & leave today for Port Said."

In the 1930 US Census, "Occupation" for Robert is listed as "Importer" for a "Rug Co". There is no occupation listed for Leila.

In 1927, daughter Edna, finally in the US, married Robert Young in Staten Island. In 1932, Edna, Robert and son Robert (born 1928) contracted scarlet fever. While helping to take care of the stricken "crew", Leila Clinckett also caught scarlet fever. She died in February 1932 at the early age of 49.

In 1936, Robert moved to Chicago for his work as a salesman. His 1937 application for the new Social Security program lists address as "830 So Michigan Ave, Chicago" and employer as "Mandell Bros".

Robert returned to Staten Island to see daughters and grandchildren in June 1941. While visiting daughter Dorothy, in the Kramer home at 40 Bancroft Ave, New Dorp, Robert was afflicted with a ruptured appendix. He passed away in the hospital at the age of 59.

Just months earlier, Robert ("Bobby") wrote the following in a letter of Sunday, February 9, 1941, to granddaughter Noel Kramer (age 10), on letterhead of the Hotel Clayton ("Opposite Lincoln Park");

I enclose a few stamps for your collection.

I heard over the Radio last night that New York has had the worst snow fall in many years, from 14 to 16 inches, and coming so soon after the former snow fall you must have real winter scenery.

In my walk this morning I noticed that the tulip bulbs are breaking through with their little shoots. I enjoy seeing the waking plant life after their long winter sleep. The swans, geese & ducks are all batting & splashing in the pools amidst the ice which is melting as there is a bright sun & one can sense that the water fowl know that spring is near. 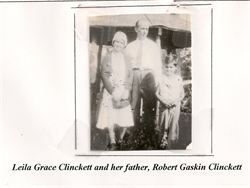 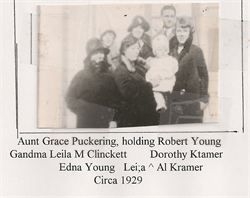